What not to miss in the Salamanca district

BARNES highlights Barrio de Salamanca and Retiro as the most distinguished areas of Madrid. Districts of perpendicular streets and elegant manners, insignia of luxury and exclusivity, with a careful architectural aesthetics and that 'know-how' at the height of the most exquisite tastes.

The Golden Mile, the Juan March Foundation, the Lázaro Galiano Museum, the countless renowned avant-garde cuisine, the Buen Retiro Park or the Botanical Garden give these neighborhoods unique spaces of nature, leisure, art and culture.

It is in its streets where the international strength of the Madrid brand is recognized. BARNES puts the accent on these districts offering the most luxurious homes and in demand by the national and international high society, is that magnificent fusion between the most prime interior design and the majesty of its classic buildings.

In the middle of the 19th century the growth of Madrid’s population meant that the old wall of Philip IV had to be knocked down to allow Madrid to expand into the districts of Argüelles and Salamanca. The latter was initiated by the marquis of Salamanca.

The architectural styles in fashion in Paris were used to develop a rectangular layout with wide streets, especially the main thoroughfares. After it was built, the district became the home of the Spanish nobility and bourgeoisie.

It is said that the Marquis of Salamanca died with a sizeable debt owing to the difficulties that he went through to complete the construction of the district.

Alongside the more exclusive labels, you can also find other more high-street fashion such as Zara, Mango, Cortefiel, Stradivarius and the El Corte Inglés department store. Alternatively you can pop into shopping centres such as El Jardín de Serrano housed in a 19th century palace or ABC Serrano inside a spectacular 19th century building.

The Golden Mile is also home to some of the most important national and international jewellery stores such as Tous, Suárez, Cartier, Tiffany & Co. and Bulgari. 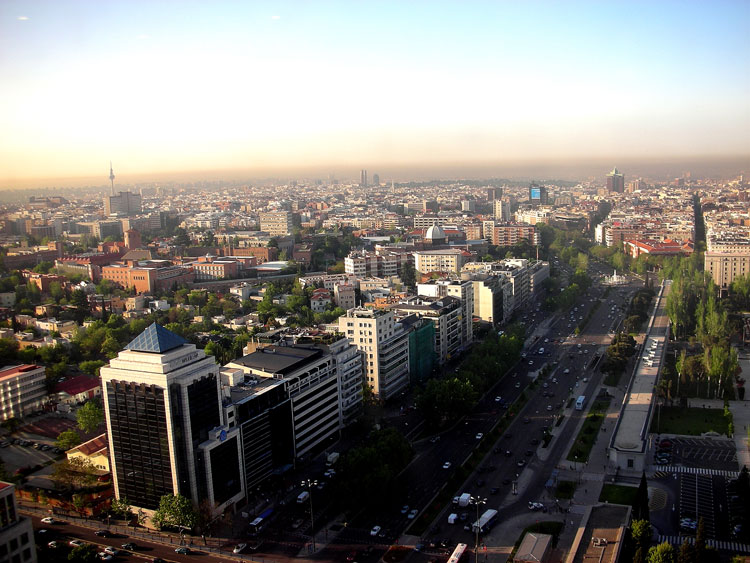 While the Salamanca district is not one of the main sightseeing areas, there are interesting things to see. You could start your stroll through Salamanca at the Plaza de Colón square where you’ll find the neo-gothic monument to Christopher Columbus. Just below the big square is the Centro Cultural de la Villa, which puts on a big variety of leisure and cultural activities.

In the same square you’ll find the National Library and the Book Museum, which was previously only open to researchers but is now open to the general public. Just behind the library is the Archaeological Museum, which can be accessed from calle Serrano.

The Lázaro Galdiano Museum, located at no. 122 calle Serrano, is considered to be one of the best private museums in Spain, with a collection of over 15,000 works of art and a library of more than 20,000 books.

The Juan March Foundation, located at no. 77 calle Castelló, was founded in 1955 by the Spanish financier Juan March de Ordinas. The Foundation’s aim is to promote culture, science and the humanities. It organises exhibitions, concerts, conferences and seminars.

At no. 98 calle Lagasca, although you can’t go inside, it’s worth taking a look at the building that houses the Italian Embassy. It is a former Palace of the Marquises of Amboage, built in 1912 in a completely eclectic style.

The properties at one this week

Madrid - Nueva España - Luxury property in one of the most premium areas of Madrid with fantastic views of Paseo de la Castellana.

Madrid - Recoletos - Prestige apartment in the heart of Recoletos

Our luxury real estate news and best selection
Are you interested in...?