The historical centre of Madrid

By taking a walk through the centre of Madrid you are surrounded by centuries of history, where you can take in the aromas and flavours, touch Arab walls and medieval palaces, try the city’s famous stew (cocido madrileño), listen to peoples’ conversation in the thousands of bars, and feel the life on every corner.

If you don’t know Madrid we’ll take you on stroll through its oldest and most traditional part, to make sure you enjoy every one of its secrets. 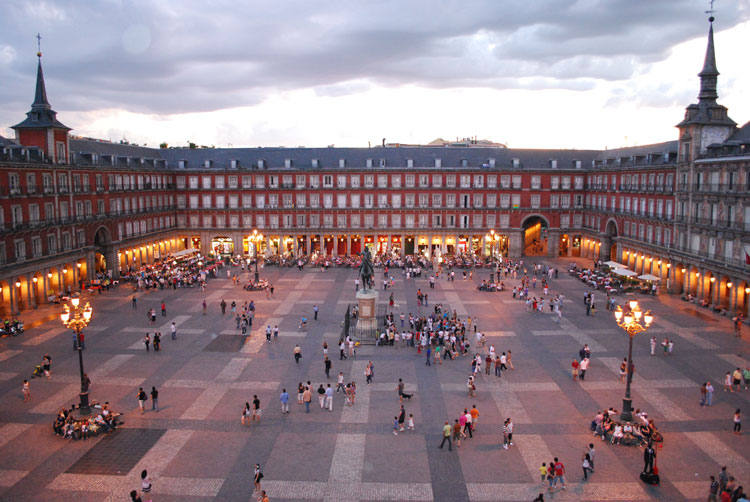 A walk through history

To get to know the historical centre of Madrid, a good point of departure is Puerta del Sol square, undoubtedly the city’s heart. It takes its name from its location where the original gateway to the city with the same name once stood. The square has the shape of a half moon and its southern side is occupied by a red brick building where the Madrid Community government has its headquarters. In 1866 the famous clock was added to the building in front of which a large crowd of people gathers at midnight on New Year’s Eve to hear the twelve chimes and eat twelve grapes.

At the Puerta del Sol square you can find the zero kilometre of the Spanish roads and the sculpture of the bear and the strawberry tree that symbolises Madrid. The square has been a silent witness to many important events in the history of Spain. In 1808 there was the uprising of the people against the Napoleonic troops, in 1912 the President of the Government José Canalejas was assassinated and in 1931 the Second Republic was proclaimed.

From the Puerta del Sol you can go along calle Mayor and reach another of the city’s iconic squares, Plaza Mayor. It is curious to know that the site occupied by the Plaza Mayor in the Middle Ages was outside the city walls and that it was a marshy area called the Lagoons of Luján, where the “Plaza del Arrabal” was formed, a popular market set up to avoid paying the taxes levied on merchants in the city.

From the western side of the Plaza Mayor you can reach the market of San Miguel. In recent years, the market has become a well-known spot to enjoy all kinds of tapas and raciones.

From the Puerta del Sol you can also walk along calle Arenal street to Plaza de Oriente square, one of Madrid’s most attractive spots, and where you can visit some of the most outstanding monuments in the city. At Plaza de Oriente you can see the equestrian statue of Philip IV, which is considered to be the finest in Madrid. From the square you can go into three important buildings. The first is the Royal Palace which you can visit when there are no official ceremonies taking place, the Almudena Cathedral where you can go up to roof terrace located in the dome of the building to take in the panoramic views, and the Royal Theatre, where you can take a guided tour.

A short stroll from the Plaza de Oriente will take you to Plaza de España square another of the iconic landmarks of Madrid, with its iconic skyscrapers and the monument to Miguel de Cervantes. You can’t miss seeing Casa Gallardo, one of the best examples of Art Nouveau in Madrid.

From Plaza de España, you can go up Gran Vía, passing through Plaza de Callao and the Telefonica building, which became the first skyscraper in Europe at the time of its construction in 1926.

To conclude the visit to the historic centre, pass through the area of La Latina, which you can reach from the San Miguel market. The streets Cava Baja, Cava Alta and calle Segovia and all the surrounding area are full of tapas bars where you can enjoy the very best of Spanish gastronomy.

The properties at one this week

Madrid - Nueva España - Luxury property in one of the most premium areas of Madrid with fantastic views of Paseo de la Castellana.

Madrid - Recoletos - Prestige apartment in the heart of Recoletos

Our luxury real estate news and best selection
Are you interested in...?